The Cult of Masculinity in Computing

Update: I titled my first book after its central characters, adopting a contemporary term for these new specialists — “the computer boys” — that for me neatly captured mixed sense of awe, mystery, suspicion, and derision with which this unexpected powerful new group of experts were regarded by their contemporaries. Like the other terms collectively applied to these experts (“wizards,” “hackers,” “gurus,” and “cowboys”) the term “computer boys” spoke to the ways in which these specialists were alternatively admired for their technical prowess and despised for their eccentric mannerisms and the disruptive potential of the technologies they developed. To many observers in this period , it seemed the “computer boys” were taking over, not just in the corporate setting, but also in government, politics, and society in general. 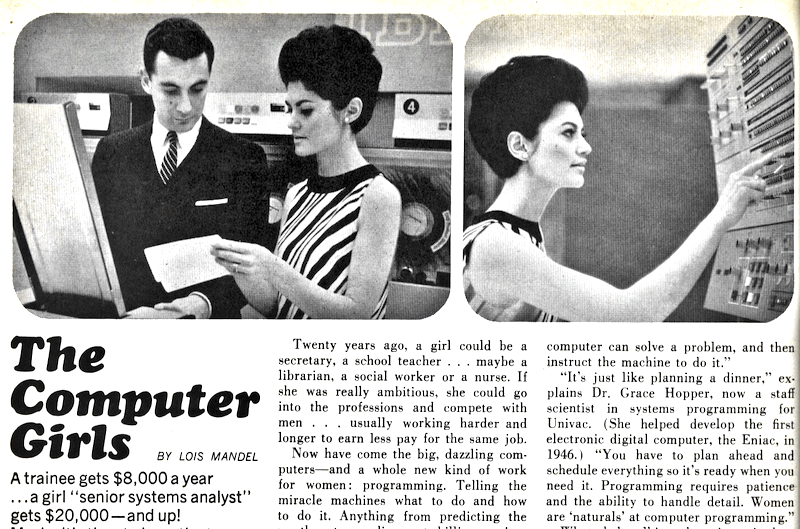 But there is another, more literal sense in which “the computer boys took over,” and has to do with the masculinization of computer culture that occurred over the course of the late 1950s and 1960s. It often surprises people to learn that computer programming was originally envisioned as women’s work, and that it took several decades for computing to acquire its distinctively masculine identity.

In both the Computer Boys book and a subsequent essay in the edited volume Gender Codes (which focused on the astonishing 1967 Cosmopolitan Magazine Computer Girls article pictured above) I wrote about the remarkable occupational sex-change that occurred in the history of the computer professions. I focused particularly on the ways in which the widespread use of aptitude testing and personality profiles in hiring practices in this period helped create and reinforce the stereotype of the computer programmer as young, male, and anti-social.

I now in the process of extending my history of gender and computing to cover the period between the late 1960s and early 1980s. I have a new article coming out in the forthcoming special issue of Osiris dedicated to scientific masculinities. The article is called ‘Beards, Sandals, and Other Signs of Rugged Individualism’: Masculine Culture within the Computing Professions. The focus of this piece is on the emergence of the “computer bum” in academic computer labs in the late 1970s and its subsequent popularization of this almost exclusively male phenomenon in the sensationalist media coverage of the “computer hacker” in the early 1980s.

Update: the published Osiris version of the Beards and Sandals paper is now available.

But while this new piece focuses processes of masculinization, the underlying assumption is, of course, that there is a larger history of women in computing against which these processes are revealed. It is too early to reveal much about the forthcoming Osiris paper, but in honor of Ada Lovelace day, here is one of my favorite lines from the new work:

… to borrow a relevant metaphor from computer programming itself, the presence of women in early computing was a feature, not a bug.

It is very exciting how much to see how much is happening in the history of computing in celebration of this day (and in anticipation of future celebrations), from historical documentaries on the ENIAC programmers and Grace Hopper to events aimed at encouraging women in computing.

Nathan Ensmenger is an Associate Professor in the Luddy School of Informatics, Computing and Engineering at Indiana University, where he also recently served as the Chair of the Informatics department.