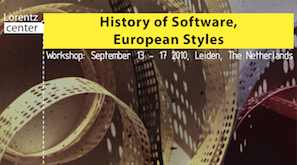 On September 13 I will be giving a keynote address at the Software for Europe conference at the Lorentz Center for the Sciences in the Netherlands. The talk will focus on the work practices of computer operators in the late 1950s and early 1960s. Among other things, I will argue that computing is a much more human activity that we might otherwise imagine, even in the era of electronic computing. There were hundreds of thousands of computer workers employed in the first two decades following the invention of the electronic computer, and the “human element” in computing was frequently identified by contemporaries as the critical challenge facing the future of the commercial computing industry.