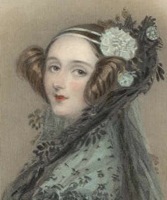 On Tuesday, April 14, I will be responding to a screening of the documentary “To Dream Tomorrow,” which is about computing pioneer Ada Byron Lovelace, who is often referred to as the first computer programmer.

The film is been shown as part of a series called Women of Power, which includes documentaries about Hildegard of Bingen and the botanist Maria Sibylla Merian.

More information about the Lovelace documentary and its filmmakers can be found here.